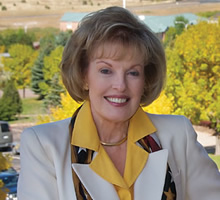 Shirley Dobson, wife of Dr. James Dobson, is nationally recognized for her leadership skills and her many contributions to women’s affairs, Christian organizations, and the institution of the family. Former President Ronald Reagan invited Mrs. Shirley Dobson to the White House for a Christian Women’s Leadership Conference in 1988. Also in that year she was awarded the Second Annual Maggie Sloane Crawford Award by Olivet Nazarene University in Kankakee, Illinois.

She has received honorary doctorate degrees from Asbury Theological Seminary, Biola University, Huntington College and Dallas Baptist University.  In September 1992 Shirley Dobson was honored with the Christian Woman of the Year Award.  Mrs. Dobson was designated Churchwoman of the Year in 1996 by Religious Heritage of America; also that year, she received the Ambassador Award from Florida Family Council. In 1999 she received the Full-time Homemaker of the Year Award from Eagle Forum, and in 2000 the Distinguished Achievement Award from Point Loma Nazarene University. She was given the First Baptist Church of Dallas' "W.A. Criswell Lifetime Christian Citizenship Award" in 2006.

A graduate of Pasadena College, Mrs. Dobson earned a Bachelor of Arts in Education; her name was included in "Who's Who in American Colleges and Universities" during both her junior and senior years. Following graduation she taught in the Hudson and Arcadia Unified School Districts in California. After her marriage and the birth of her first child, she chose to become a full-time mother and homemaker.

Mrs. Dobson's outreach to Christian women has included leadership roles in Bible Study Fellowship and other groups devoted to the study of Scripture. She has also served as Director of Women's Ministries for a large evangelical church and has spoken across the country about issues affecting women and families. She was a featured speaker at Focus' "Renewing the Heart" women’s conferences.

Mrs. Dobson has served as Chair of the National Day of Prayer Task Force since 1991. Through the efforts of her team, tens of thousands of prayer gatherings are conducted by approximately 40,000 volunteers across the country. Several million people participate every year in this call to prayer for our nation, its leaders, and citizens. In addition, Mrs. Dobson served on the Board of Directors for Focus on the Family from 1978 through February 2009 and is now an emeritus member.

Shirley Dobson and Gloria Gaither have co-authored a four-book series for families. The publications are titled Making Ordinary Days Extraordinary, Creating Family Traditions, Celebrating Special Times with Special People, and Hide it in Your Heart. She has also co-authored Nightlight: A Devotional for Couples and Nightlight for Parents with her husband, Dr. James Dobson. Her book describing the remarkable gift of prayer, Certain Peace in Uncertain Times, was published in 2002. Most recently, Shirley and her daughter, Danae Dobson, wrote the heartwarming book Welcome to Our Table.

Mrs. Dobson is married to Dr. James Dobson, founder and chairman emeritus of Focus on the Family and founder and President of Family Talk. They have two grown children and two grandchildren. Dr. and Mrs. Dobson reside in Colorado Springs, Colorado.