A new year has begun, and with it comes a national remembrance marked by sorrow and shame. On January 22, 1973, the Supreme Court handed down two rulings that would change our country, and the world, forever. I’ll never forget that day. At that time, I was a professor at the University of Southern California School of Medicine, and I had spent the day on campus. I was driving home and listening to the radio when I heard a tragic announcement. Those two decisions were Roe v. Wade and Doe v. Bolton. Seven justices had voted to legalize abortion throughout nine months of pregnancy, for any reason (or for no reason). America had declared war on its unborn babies and vulnerable mothers. Now, 45 years later, more than 58 million preborn babies have been murdered in hospitals and clinics all over the country.

My father and I grieved that night over this brutal assault on human life. The following Sunday morning, Shirley and I waited to see what our pastor would say from the pulpit. He was a good man and a great minister, but he was silent on that day. Most of Protestant America reacted with the same disinterest. It was a non-issue in most churches. The exception was the Catholic leadership, which understood the significance of the Supreme Court’s decisions. Many of its priests spoke out against the carnage.

It would be 11 years before a president of the United States, Ronald Reagan, spoke up in defense of unborn babies. His predecessors, Gerald Ford and his wife, Betty, and Jimmy Carter and his wife, Rosalynn, were all avid supporters of abortion on demand. But on January 13, 1984, Ronald Reagan issued a presidential proclamation designating January 22, 1984, as National Sanctity of Human Life Day. It stated the following:

The values and freedoms we cherish as Americans rest on our fundamental commitment to the sanctity of human life. The first of the “unalienable rights” affirmed by our Declaration of Independence is the right to life itself, a right the Declaration states has been endowed by our Creator on all human beings—whether young or old, weak or strong, healthy or handicapped.

Reagan went on to say:

Since 1973, however, more than 15 million unborn children have died in legalized abortions—a tragedy of stunning dimensions that stands in sad contrast to our belief that each life is sacred. These children, over tenfold the number of Americans lost in all our Nation's wars, will never laugh, never sing, never experience the joy of human love; nor will they strive to heal the sick, or feed the poor, or make peace among nations. Abortion has denied them the first and most basic of human rights, and we are infinitely poorer for their loss.

We are poorer, not simply for lives not led and for contributions not made, but also for the erosion of our sense of the worth and dignity of every individual. To diminish the value of one category of human life is to diminish us all.1

Thank God for Ronald Reagan! I believe he would have ended the carnage of abortion if he had had the Congressional votes to pass his legislation. Unfortunately, Reagan nominated two Supreme Court Justices who turned out to support abortion.

As the 1980s passed, the pro-life movement gathered momentum. Activist Phyllis Schlafly took on the cause and convinced millions of American conservatives to become involved in the battle to save babies. She had a major impact on me, personally.

On April 28, 1990, National Right to Life organized an incredible rally in Washington, D.C., on behalf of preborn children. I have never seen anything like it. The event was held at the Washington Monument in the nation’s capital, and a crowd estimated to exceed 400,000 participants completely surrounded the monument. It extended down the mall and up each side street.

I was one of the speakers that day. My son, Ryan, and I were wearing bulletproof vests as I stepped to the platform. I don’t remember everything I said, but I do recall saying with passion, “I will NEVER cast a single vote for any candidate who will kill one innocent baby.” The crowd roared in agreement. (If you were there, I wish you would write and share your thoughts with me.) 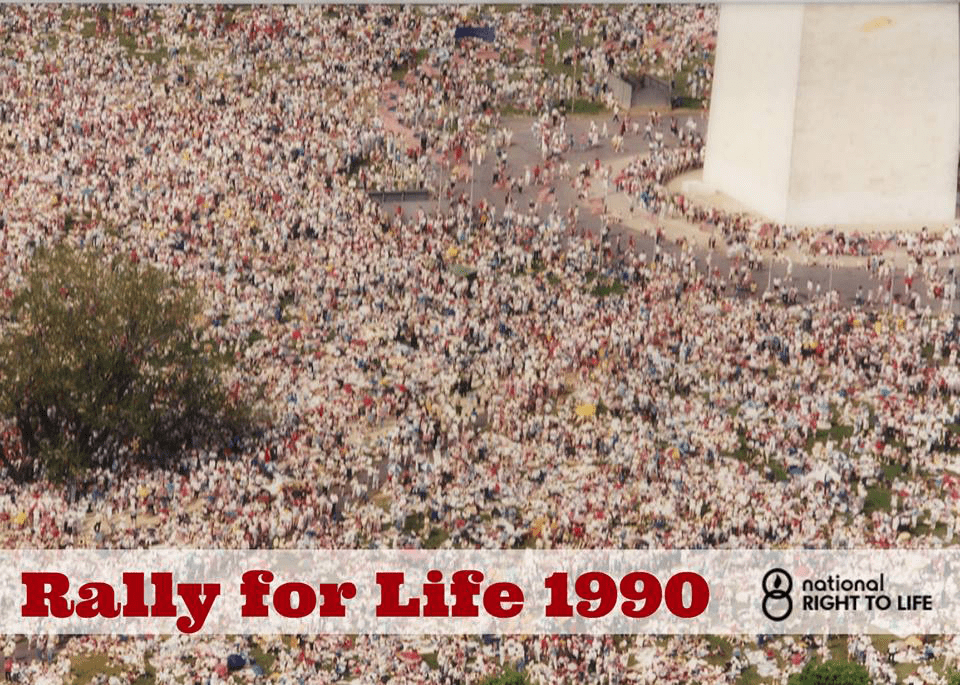 We come now to our day and to the president who may turn out to be the most pro-life chief executive of them all. He is Donald Trump, who, in one year in office, has done more to protect unborn babies than any of his predecessors. Consider what he has accomplished for that cause in his first year in power:

1) One of the first actions by President Trump after the inauguration in January 2017 was to reinstate the Mexico City Policy that bans U.S. funding for non-governmental organizations that promote abortions overseas. Trump sent Vice President Mike Pence and presidential counselor, Kellyanne Conway, to speak at the March for Life in Washington on January, 22, 2017.2

3) Also in April 2017, the State Department announced it would withhold federal funding from the U.N. Population Fund because of its support of Chinese agencies that perform forced abortions and sterilizations.4

4) Trump also began leaving a potentially significant pro-life mark on the judicial branch, with his nominations of new judges for the federal courts. The most significant appointment so far has been naming Neil Gorsuch to the Supreme Court as successor to the late Associate Justice Antonin Scalia. Gorsuch was approved by the Senate on April 7, 2017.5

5) President Trump nominated Amy Barrett to the 7th Circuit Court of Appeals in Chicago. She was confirmed by the U.S. Senate on October 31. “Judge Amy Barrett’s confirmation is a victory for the pro-life movement as well as for the fundamental freedom of all Americans to live out their faith in the public square. We thank President Trump for keeping his promise to nominate judges who will respect the Constitution and not impose a pro-abortion agenda from the bench,” said Susan B. Anthony List president Marjorie Dannenfelser.6

6) The House did approve the Pain-Capable Unborn Child Protection Act to prohibit abortions after 20 weeks — but the bill remains stalled in the Senate. Trump promised his pro-life supporters he would sign the bill into law if it reached his desk.7

8) On December 12, the Senate approved a pro-life appellate court nominee and pro-life groups are celebrating the confirmation of Steve Grasz to the United States Court of Appeals for the 8th Circuit Court. (While serving as Nebraska’s Chief Deputy Attorney General, Judge Grasz authored nine briefs in the U.S. Supreme Court and defended the state’s ban on partial-birth abortion before the Supreme Court in Stenberg v. Carhart.)9

For those of us who believe that all human life is a gift from God and worthy of protection, our mission will remain clear regardless of the shifting tides of public opinion. We at Family Talk will stay the course to promote legislation that preserves and defends the sanctity of life at every stage, from conception to the grave. With the elections coming up later this year, I hope you will do everything you can to stay informed on this issue. Family Talk will be tracking important developments as election season draws near. You can keep updated by logging on to our website at drjamesdobson.org. And by all means, see that you are properly registered to vote in November. Not one citizen can afford to sit out on that day of decision!

I hope you will join me in praying that, regardless of our laws, and regardless of who is in office at any given time, Americans would once again embrace the biblical values upon which our belief in the sanctity of human life is based. As more and more people come to realize that every life is important and worthy of protection—whether a developing baby in the womb, a conflicted woman facing a choice, or an elderly hospice patient who can no longer care for himself—may they gain a newfound awareness of the loving Creator of all life. It's up to us, by our words and deeds, to help make sure that happens. May God grant us strength and resolve for the challenges that lie ahead.

Thank you for your ongoing support for Family Talk as we look forward to 2018. This ministry will continue to fight for the sanctity of human life as long as we have a voice with which to speak. We appreciate you all.

This letter may be reproduced without change and in its entirety for non-commercial and non-political purposes without prior permission from Family Talk. Copyright, 2017 Family Talk. All Rights Reserved. International Copyright Secured. Printed in the U.S.A.