A Critical Time for Prayer 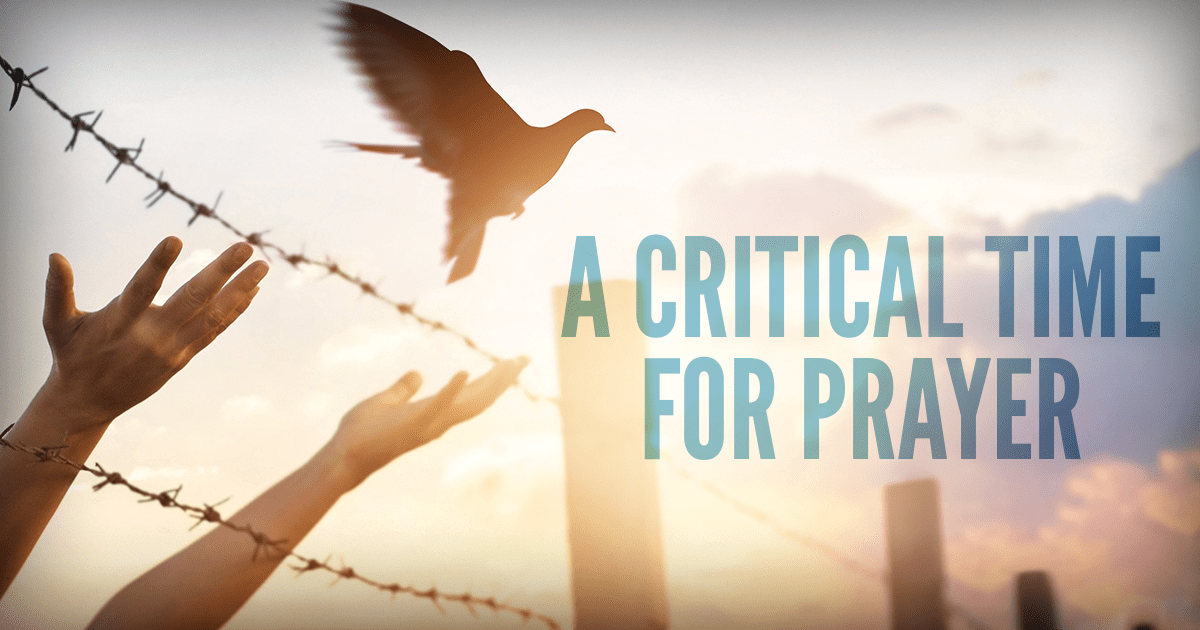 As I sit down to write this letter, I continue to have a heavy heart about the multiple tragedies occurring to the gentle people of Ukraine. Images of their plight are ever on my mind. How can I write about anything else? Recently, Fox News showed a heart-wrenching video of a man carrying a baby wrapped in a blanket. The child, perhaps one-year-old, had been hit in the head by shrapnel from a Russian bomb. Behind them was the baby's mother who was weeping bitterly as they approached a makeshift hospital. The baby died a few minutes later.

Since then, the Russian army has bombed a maternity hospital in Mariupol and killed a mother and her baby—and an unknown number were injured. They also destroyed a large children's hospital. What brutality!

I thought again today about the devastated people who are suffering every deprivation. They have little food for themselves or their children. Many of them are huddled in unheated ruins without medical supplies, electricity or even water. What also gnaws at my soul is the fracturing of families that is occurring. More than three million refugees, mostly women, children and widows, have fled to Poland, Hungary and other countries in Eastern Europe, knowing they may never see their loved ones again.1 Some of the refugee children caught a final glimpse of their fathers at a train or bus station as they kissed them goodbye before rushing back into combat against impossible odds. These patriots have lost everything!

There is one man responsible for this human suffering. It is Vladimir Putin, the Russian despot who has inflicted untold horror on the citizens of Ukraine. Senator Lindsey Graham said a few weeks ago that someone within the Soviet system should "take out" Putin.2 Sen. Graham has been criticized vigorously for his comment. I was shocked at first, but now believe he was right.

I lived through WWII as a child, and I have wished as an adult that the German officer, Colonel Claus von Stauffenberg, had been successful when he attempted to kill Adolf Hitler on June 20, 1944. He placed a bomb under "Der Fuhrer's" table, which exploded violently. Somehow, Hitler survived the blast. Stauffenberg was executed that evening and the war continued for another bloody year.3

Some murderous tyrants need to be "taken out" to save innocent lives. That, at least, is my view.

What concerns me most about the Ukraine war is the role blackmail appears to be playing in Russia's hands, and how effectively it is working. Putin said that if America sends planes to defend Ukraine, Russia will retaliate by using nuclear weapons.4 President Biden and his advisors immediately got the message and changed their rhetoric. According to the brilliant commentator, Mark Levin, our President and his advisors have apparently decided that Ukraine must not be allowed to win. If Russia loses, Biden and the Pentagon have concluded that Putin will have been humiliated and backed into a corner. This, they believe, could lead to WWIII.5 That is an unthinkable outcome, of course, but yielding to nuclear blackmail can also be terrifying.

This is what I am hearing from people I trust. Authorities on Russian politics agree that Ukraine will not be the end of Putin's territorial ambitions. It would only be the beginning. His ultimate goal is to recapture the glory of the USSR, which collapsed in 1989. Since then, Russia-watchers have believed Putin has been planning to subdue the Baltic states of Estonia, Latvia, and Lithuania. Blackmail will be used again. Next in line would be Eastern and Western Europe, Britain and the U.S. Somewhere along the line, Putin's nuclear bluff, if it is a bluff, must be challenged. Never forget that watching from the sidelines are China, Iran and North Korea.

Do I have an answer for the territorial ambitions of tyrants? Of course not! What I have written here could prove to be entirely off base. But it doesn't take a military strategist to perceive what Putin is up to. I'm convinced he will stop at nothing to achieve his objectives. Most importantly, I don't think our President has a clue about international affairs.

I don't trust our military leaders, either. They are busily trying to make the Pentagon more politically correct and in line with corrupt leftist ideology.6 We are living in a dangerous world and this is no time for social experimentation.

Personally, I am convinced that Almighty God is active in the affairs of mankind. It does appear to me that we are entering what has been referred to by biblical scholars as "end time events." No one knows how human history will play out in the days ahead, but we can be sure they will be guided by His mighty hand. Ultimately, according to my theological understanding, the Rapture will occur along with the other events that were foretold in Scripture by the prophets of old.

The New Testament ends with the phrase, "Even so, Lord Jesus, come quickly." Amen.

This is a critical time for prayer by people of faith. Let's join together with a united voice in asking the God whom we serve to lead and guide in these perilous times. Nothing will happen that is not permitted by Him. This is not a time for despair. Our obligation is to win as many people to Jesus Christ as possible and to say with the prophet Isaiah, "Send me."

Thank you for letting me share my thoughts with you today. Until next time, I'm…