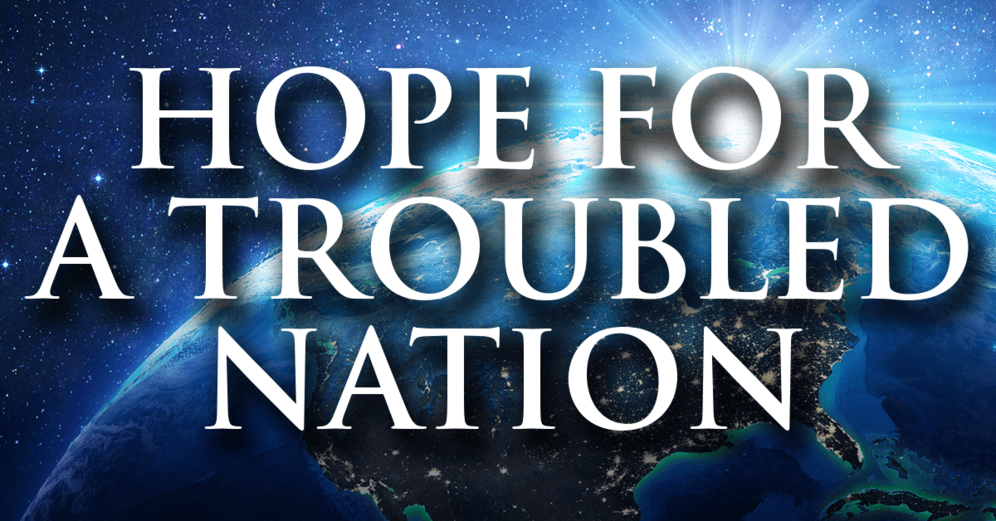 I am writing today about something that is heavy on my heart. As we celebrate the 244th anniversary of our founding, America is divided into opposing camps. On the one hand, it is noble and beautiful, generous to a fault, and remains a shining light set on a hill. I love her dearly and pray for her safety because she has many enemies whose passion is to destroy her.

The "other America" is driven by a popular culture that represents evil personified.It hates the spiritual foundation that made her the greatest nation on earth. Its proponents deny the existence of God and bristle at the name of Jesus. They have made this country the pornography capital of the world and built its financial empire on perversion, pedophilia, profanity, infidelity, sexual enslavement, illegal drugs, lawlessness, gambling, power mongering, dishonesty, greed, hatred, racism, and violence. This moral degeneracy has resulted in shattered families, public schools that are corrupting our young, and seething hostility to the institution of marriage. God's holy name has been reduced to a sacrilege. A centerpiece of this evil world is the abortion industry which has murdered 60 million babies whom the Creator was knitting together in their mothers' wombs. Their blood calls out to the Creator from the ground in which they lie.

There is one phrase I would choose to describe this "other America." It is utter wickedness.

Evil is not a new phenomenon, of course. It is the history of fallen humanity. A graphic example is the Roman Empire, which was also awash with evil. It is described by the Apostle Paul in his letter to Christians in Rome. He wrote:

The wrath of God is being revealed from heaven against all the godlessness and wickedness of men who suppress the truth by their wickedness, since what may be known about God is plain to them, because God has made it plain to them. For since the creation of the world God's invisible qualities—His eternal power and divine nature—have been clearly seen, being understood from what has been made, so that men are without excuse.

For although they knew God, they neither glorified Him as God nor gave thanks to Him, but their thinking became futile and their foolish hearts were darkened. Although they claimed to be wise, they became fools and exchanged the glory of the immortal God for images made to look like mortal man and birds and animals and reptiles.

Therefore, God gave them over in the sinful desires of their hearts to sexual impurity for the degrading of their bodies with one another. They exchanged the truth of God for a lie, and worshiped and served created things rather than the Creator—who is forever praised. Amen.

Because of this, God gave them over to shameful lusts. Even their women exchanged natural relations for unnatural ones. In the same way, the men also abandoned natural relations with women and were inflamed with lust for one another. Men committed indecent acts with other men, and received in themselves the due penalty for their perversion.

Furthermore, since they did not think it worthwhile to retain the knowledge of God, He gave them over to a depraved mind, to do what ought not to be done. They have become filled with every kind of wickedness, evil, greed and depravity. They are full of envy, murder, strife, deceit and malice. They are gossips, slanderers, God-haters, insolent, arrogant and boastful; they invent ways of doing evil; they disobey their parents; they are senseless, faithless, heartless, ruthless. Although they know God's righteous decree that those who do such things deserve death, they not only continue to do these very things but also approve of those who practice them. (Romans 1:18-32)

Does this tragic description of ancient Rome sound relevant to our day? I'll respond with another question: How can we miss the similarity between then and now? What is alarming is that Paul referred three times in that passage to God giving the Romans over to their "sinful desires," "sexual immorality," and "shameful lusts." These words also characterize our nation. Where do they lead? I have no idea where we are on the timetable of God's judgment, but it is terrifying to think of Him abandoning us to our own degeneracy.

There are many examples in Scripture of peoples in world history who became so wicked that Jehovah "gave them over" to disaster, such as occurred in Noah's day. Every human being died in a flood that covered the earth, except one righteous man and his family. Destruction also befell the cities of Sodom and Gomorrah. Only Lot and his daughters survived. Finally, Jerusalem was utterly destroyed by the Babylonians who tore down their wall and then killed all but a few survivors taken into captivity and held there for 70 years. Jeremiah tried vainly to warn the Jewish people that judgment was coming upon Israel, but they were deaf to his cries. He is known to this day as "the weeping prophet." I am not a prophet, but I also weep for my country.

Judge Robert Bork, the great appellate court judge, was rejected as a Supreme Court nominee by liberal Democrats. In 1996, he published a book that described America's moral decay. He titled it Slouching Towards Gomorrah. He is deceased, but I wonder how he would describe our day.

Thankfully, the Lord offers a way out for us and for our progeny. It is genuine repentance for sin. He was willing to forgive and restore the evil city of Nineveh in Jonah's day—because they repented. That avenue of escape is graciously extended to us, as written graphically in 2 Chronicles 7:14. It reads, "If my people, who are called by my name, will humble themselves and pray and seek my face and turn from their wicked ways, then will I hear from heaven and will forgive their sin and will heal their land." Repentance is not only A hope for America; it is the ONLY hope for restoration.

That brings me to the most encouraging news I have to share with you. There is a huge event scheduled to occur on September 26th of this year. It is being called "The Return." That day happens to be the 400th anniversary of the landing of the Mayflower in 1620, when pilgrims came to America in search of religious freedom. Also, September 26th is 38 days before the next general election. It will be held on the National Mall in Washington, D.C., with the U.S. Capitol building as the backdrop. The purpose for this gathering is to pray for our beloved country, and to sing and hear from well-known speakers. It is being organized by messianic Jewish rabbi and author Jonathan Cahn along with several evangelical organizations. Cahn is the author of The Harbinger and other remarkably compelling books. For more information, go to thereturn.org. Lord willing, I will be one of many speakers on that historic day. It will be live streamed all around the world, and the prayers will focus on five R's: return, repentance, reconciliation, revival, and restoration.

To summarize, while it often appears that Western Civilization as we have known it is in its closing days, there are millions of Christians in this country who love Jesus and are praying fervently for a spiritual renewal. I am convinced that their plaintive pleas are being heard in heaven. Are you among them? We are His remnant, and we must be on our faces before the living Lord.

Will you stand firmly with us in these days of decision? Everything that made America great in these 244 years hangs in the balance. When I am tempted to despair, I remember that God is in control. Let's continue to ask Him to bring a mighty spiritual reawakening that will restore our beloved nation to its spiritual roots and draw us to Himself.