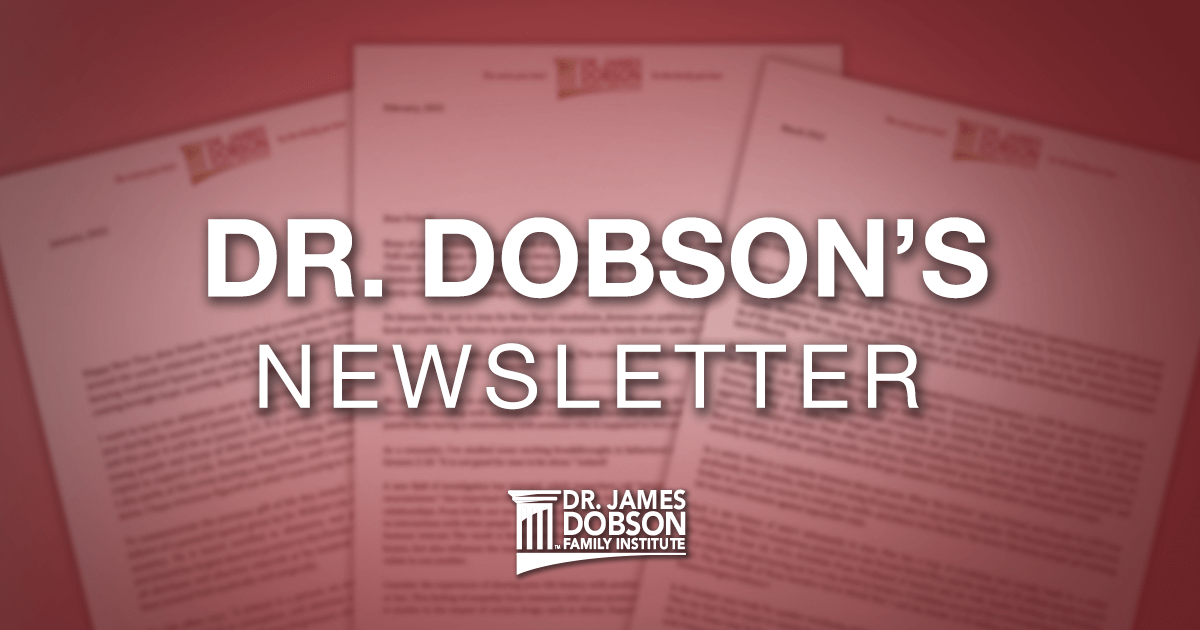 Merry Christmas from Shirley and me and from the team at Family Talk! Join us as we celebrate God’s indescribably gracious gift to us, His one and only Son, Jesus Christ, who left His home in Heaven to become our Savior through His death on the cross and His glorious resurrection. There is no greater gift!

May I take this opportunity to express my love and care for you, our nation and families around the world? You’ve heard me say many times that we live in perilous days. It’s often difficult to listen to news reports and even more trying to deal with the challenges that we encounter everyday – health issues, finances, broken relationships and weariness. I, too, find myself discouraged and questioning what the future holds. But this I know, God is our Defender, Protector and Provider. The Lord cares deeply for each and every person, and He will not let us go.

The institution of the family continues to be under attack, and we have a big job to do. That’s why Family Talk exists. There is much work to be accomplished, but as we stand together for the family we can change the course of our nation. Ours is a message of legacy – to strengthen marriages, to support parents in shaping the next generation, to defend life and to increase the Kingdom of Christ.

As you may know, I am working on a project called “Building a Family Legacy.” The original film series from 1978 spoke to a generation of parents who are now grandparents. A new generation is on the scene, raising their own children day by day. The timeless principles that we’ve grappled with through the years need to be taught and articulated again. My son, Ryan, helped me update several of those films and to add new messages, nine in all, that will speak to spouses and parents who need practical, biblical help. The project is in process, but I was privileged to speak with a wife, mom and journalist, Joyce Koo Dalrymple, who attended some of the tapings several months ago. Mrs. Dalrymple penned a very kind and encouraging article that explains why I continue to stand for the family. She says:

I was, I thought, as prepared as one could be. At 32 years old, I had a law degree, some life experience, and a wonderful example of healthy parenting in my own mother. I thought, how hard can this parenting thing be? Billions of women do it, right?

Then our daughter entered the world on September 9, 2008; screaming, swollen, helpless, and completely dependent on me for survival. As I held her 8 pound, 2 ounce body for the first time, the enormous weight of the responsibility hit me with such force that my heart ached just as much as my body did from the trauma it had just endured. I thought how miraculous, how beautiful, how scary this parenting adventure is going to be!

After the blessed newborn sleepiness wore off, and our daughter had been home for a few weeks, she started crying inconsolably, every single day, for hours and hours on end. My husband and I tried everything that we had learned from the baby books, all to no avail. I felt completely inadequate because I could not comfort my baby. I felt exhausted, isolated, and guilty. I had longed for this baby, and indeed I loved her with my entire heart, but I honestly did not like being a mother, which I had thought would come so naturally to me. The weight of this burden bore me down into a long, dark depression.

It turned out that our daughter had a milk allergy, colic, reflux, and an assortment of food allergies. Eventually, she outgrew these ailments, but the same qualities that enabled her to cry for hours on end remained; she had seemingly endless reserves of energy, a superhero’s determination, and an extremely strong will.

When I fed her solids for the first time at five months of age, she immediately snatched the spoon away and cried unless I let her feed herself. As she was learning to talk, she insisted that every four-legged animal was a “dog” and every kind of fruit was an “apple.” I tried to point out that there was a difference between a dog and a cat, and that there were pears and oranges as well as apples. Although she could barely talk, she believed, in her newfound wisdom, that I needed correction. As a toddler, she seemed to take every opportunity to challenge my authority. When I told her not to color on the table, she looked directly at me and colored on the table. If I gave her a time-out for her defiance, she hid a crayon in her hand and colored on the wall next to her time-out chair. She has broken three of our windowpanes from throwing things with such force! She frequently exclaims, “I want to be the boss!”

Both my mother and mother-in-law recommended Dr. James Dobson’s book, The Strong-Willed Child. Originally released in 1978, the book has sold nearly three million copies. Another of Dobson’s books, Dare to Discipline, provided more nuts and bolts in how to raise a child like ours. Both books have been updated, now entitled The New Strong-Willed Child and The New Dare to Discipline, but the principles are timeless.

Dobson won me over in the introductory chapter of The New Strong-Willed Child. He writes that it is very common for parents of strong-willed children "to feel great guilt and self-condemnation. They are trying so hard to be good parents, but the struggle for control that goes on at home day after day leaves them frustrated and fatigued . . . While she can and must be taught to respect authority and live harmoniously with her neighbors, she will always have an assertive temperament. That is not a bad thing. It simply 'is.' During the childhood years, it is important for parents not to panic. Don't try to 'fix' your tougher boy or girl overnight. Treat that child with sincere love and dignity, but require him or her to follow your leadership. Choose carefully the matters that are worthy of confrontation, then accept her challenge on those issues and win decisively. Reward every positive, cooperative gesture she makes by offering your attention, affection, and verbal praise" (p. 11-12).

Dobson discusses two guiding principles: love and control, which are like two sides of a scale. He notes that if love and control are understood and implemented properly, then the parent-child relationship is likely to be healthy. "It is often very difficult to balance love and control when dealing with a strong-willed child. The temptation is to tilt beyond one of the two boundaries—toward white-hot anger and oppressiveness, or toward permissiveness and disengagement. Why? Because the constant battles that these tougher kids precipitate can cause a parent to become a screamer and a tyrant or one who lets the child rule pathetically. There is a danger for a youngster on either side of the 'runway'" (p. xii).

Now Dobson is updating the best of a 1978 film series on parenting that was seen by more than 80 million people. His son Ryan, a new father himself, happened upon one of the videos and convinced his dad to revive the old series. Ryan is the associate producer of the new series, entitled, Building a Family Legacy. Nine titles are included: Trashing Your Trophies, A Family Legacy, Bringing Up Girls, Bringing Up Boys, The Strong-Willed Child, Shaping the Will Without Breaking the Spirit, Marriage, Christian Fathering, and What We’ve Learned.

He filmed the new series at Skyline Church in La Mesa, California, over two weekends in June 2012, before a total audience of 5,000. He called on parents today, who are so thoroughly overworked and distracted, to be present and engaged in the lives of their children. "Culture flows like a powerful river, and it is extremely difficult to prevent your kids from being swept downstream into unknown waters. You must not become distracted from your ultimate priority, which is to raise healthy children and introduce them to Jesus Christ."

Dobson was 42 years old and raising his two children at the time he made the first film series. Now, 34 years later, he speaks from a lifetime of personal focus and experience as a psychologist, researcher, counselor, father, and advisor. Dobson was an associate clinical professor of pediatrics at the University of Southern California School of Medicine for fourteen years and was on the attending staff of Children's Hospital of Los Angeles for seventeen years. He founded Focus on the Family as a non-profit organization to strengthen families and began a radio program in 1977. He resigned in 2010 and continues to be heard on 1,100 radio outlets. His new program is called, “Dr. James Dobson’s Family Talk.” He was inducted into the National Radio Hall of Fame, on behalf of Focus on the Family, after airing more than 7,500 radio programs.

I had the opportunity to interview Dobson at the taping of the new series. I told him about my strong-willed child. He emphasized to me the importance of our spiritual legacy. “The most important thing is to pray for our children and to introduce them to Christ." Dobson hopes that this new film series will introduce a new generation to these principles.

I want to thank Mrs. Dalrymple for so beautifully expressing the purpose of our ministry to families. Family Talk is here to serve and come alongside families – to help them build a strong and godly legacy. Our broadcasts, website, social media, counseling, digital resource library, the mobile app – all of these are in place to reach, teach and equip husbands, wives, fathers, mothers, sons, daughters and grandparents to impact millions of families in the next three years. Please join us in this great movement to stand for the family.

Before closing, I would like to say a word of heartfelt thanks to those of you who have faithfully supported us with your finances and, even more importantly, your prayers over the past year. We are truly grateful for your involvement in the mission to which the Lord has called us. 2013 promises to be another challenging year for Family Talk, and we’d love to receive an encouraging word from you as the ministry comes to mind. You might also consider a gift in support of our efforts, as the Lord leads. The donations we receive in December and January literally shape our outreach plans for the months that follow.

From the Family Talk “family” to yours, please accept our best wishes for a joyous Christmas season and a Christ-centered New Year. May the Christ-child’s peace surround your hearts and homes.

This letter may be reproduced without change and in its entirety for non-commercial and non-political purposes without prior permission from Family Talk. Copyright © 2012 Family Talk. All Rights Reserved. International Copyright Secured. Printed in the U.S.A. Dr. James Dobson’s Family Talk is not affiliated with Focus on the Family.