From the Desk of Dr. James Dobson — November 2013 Newsletter 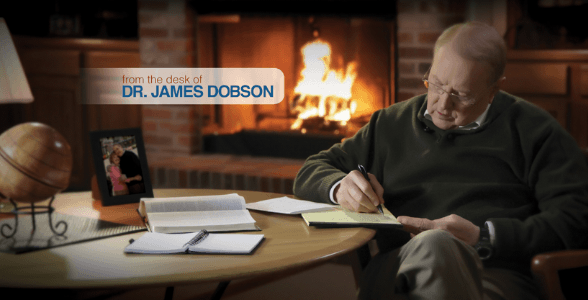 My letter this month will focus on the assassination of the 35th president of the United States. It was 50 years ago this month, November 22nd, 1963, that John Fitzgerald Kennedy was murdered while riding in a motorcade in Dallas, Texas. And America reeled in disbelief.

I will never forget that tragic day. I was talking on the telephone with a mother whose high school son was failing in school and breaking all the rules. I was a 20-something doctoral candidate and a counselor at Charter Oak High School in Covina, California, where I was responsible for the welfare of 250 freshmen. Some of them were goofy, and this mom’s son was one of them. She was very upset, and I was trying to help her deal with her wayward kid. It was a tough assignment.

At that moment, my secretary brought a handwritten sign to the window of my door. It read, “The President has been shot.” I made the mistake of reading the note out loud, and the mother became hysterical.

I ended the call and rushed out to the school grounds. Teenagers were crying and talking in hushed tones to their shocked classmates. Most of them loved JFK and couldn’t believe their idol was dead. Some were deeply angry at whoever had done this terrible thing.

Three days later, my family and I watched a black and white TV as a riderless horse was led down Pennsylvania Avenue in Washington, D.C. Jackie Kennedy was veiled in black, and her two beautiful children stood at attention. Little three-year old John-John Kennedy saluted smartly as his father’s caisson was drawn by. No one who saw that moment in history will ever forget it. The nation mourned the violent death of its most glamorous president. I didn’t vote for him, but I grieved for my country.

It was soon discovered that an anarchist named Lee Harvey Oswald had gunned down John F. Kennedy in cold blood. I was on my way to church the next morning, which was a Sunday, when it was announced that Oswald had also been shot and killed by Jack Ruby, the owner of a bar and strip shop. The world had suddenly gone crazy. Some historians say America has never fully recovered from that shocking experience.

In the days that followed, I began studying what was known about the upbringing and emotional instability of Lee Harvey Oswald and what might have motivated him to commit such an unthinkable act of brutality...

I found the most insightful information in William Manchester’s classic book, Death of a President. Ten years later, I wrote a book titled Hide or Seek, which was about building confidence in children and protecting their vulnerable little minds. It struck a chord with more than a million readers, and it is still in print today. The first chapter of my book began with these words:

He began his life with all the classic handicaps and disadvantages. His mother was a powerfully built, dominating woman who found it difficult to love anyone. She had been married three times, and her second husband divorced her because she beat him up regularly. The father of the child I'm describing was her third husband; he died of a heart attack a few months before the child's birth. As a consequence, the mother had to work long hours from his earliest childhood.

She gave him no affection, no love, no discipline, and no training during those early years. She even forbade him to call her at work. Other children had little to do with him, so he was alone most of the time. He was absolutely rejected from his earliest childhood. He was ugly and poor and untrained and unlovable. When he was thirteen years old, a school psychologist commented that he probably didn't even know the meaning of the word "love." During adolescence, the girls would have nothing to do with him and he fought with the boys.

Despite a high IQ, he failed academically and finally dropped out during his third year of high school. He thought he might find a new acceptance in the Marine Corps; they reportedly built men, and he wanted to be one. But his problems went with him. The other marines laughed at him and ridiculed him. He fought back, resisted authority, and was court-martialed and thrown out of the Marines with an undesirable discharge. So there he was – a young man in his early twenties – absolutely friendless and shipwrecked. He was small and scrawny in stature. He had an adolescent squeak in his voice. He was balding. He had no talent, no skill, no sense of worthiness. He didn't even have a driver's license.

Once again, he thought he could run from his problems, so he went to live in Russia. But he was rejected there too. Nothing had changed. While there, he married a girl who herself had been an illegitimate child and brought her back to America with him. Soon, she began to develop the same contempt for him that everyone else displayed. She bore him two children, but he never enjoyed the status and respect that a father should have. His marriage continued to crumble. His wife demanded more and more things that he could not provide. Instead of being his ally against a world stacked against him, as he hoped, she became his most vicious opponent. She could outfight him, and she learned to bully him. On one occasion, she locked him in the bathroom as punishment. Finally, she forced him to leave.

He tried to make it on his own, but was terribly lonely. After days of solitude, he went home and literally begged her to take him back. He surrendered all pride. He crawled. He accepted humiliation. He came on her terms. Despite his meager salary, he brought her seventy-eight dollars as a gift, asking her to take it and spend it any way she wished. But she laughed at him. She belittled his feeble attempts to supply the family's needs. She ridiculed his failure. She made fun of his sexual impotency in front of a friend who was there. At one point, he fell on his knees and wept bitterly, as the greater darkness of his private nightmare enveloped him.

Finally, in silence, he pleaded no more. No one wanted him. No one had ever wanted him. He was perhaps the most rejected man of our time. His ego lay shattered in a fragmented dust!

The next day, he was a strangely different man. He arose, went to the garage, and took down a rifle he had hidden there. He carried it with him to his newly acquired job at a schoolbook depository building. And from a window on the sixth floor of that building, shortly after noon, November 22, 1963, he sent two shells crashing into the head of President John Fitzgerald Kennedy.

Lee Harvey Oswald, the rejected, pitiful failure, killed the man who, more than any other man on earth, embodied all the success, wealth, physical attractiveness and family affection which he lacked.

In firing that rifle, he utilized the one skill he had learned in his entire miserable lifetime.

November 22, 2013, is upon us. Fifty years have now burned into history since those tragic days in Dallas. America lost its innocence, and random acts of violence have become commonplace. Every few days now, we witness another massacre of innocent people in malls, or schools, or marathons, or theaters, or business establishments. Some of the perpetrators are angry, some are mentally ill, and some have been victimized by their parents or by brutal classmates. More and more children, in response, have been taught that killing is the way to “get even.” One such individual was a 12-year old boy who killed a school official last month and then turned the gun on himself. Kids are regularly committing suicide because of the horrible bullying they endure.

The institution of the family, which is responsible for much of the violence, is rocking and reeling like a ship in a hurricane. We must do what we can to preserve the institution of marriage and to help build healthy homes. That is why Family Talk is here.

I ask you to help support this ministry if you can. We are having a positive impact on millions of people through radio and the Internet, and our audience is increasing month by month. As we approach the end of 2013, we need your assistance. And we need your prayers.

Happy Thanksgiving, everyone. Enjoy this holiday with your family. Your children are your most important resource, and they need to be bonded into a loving, stable, secure home. And don’t forget to tell them the true meaning of the first Thanksgiving. It was to God, and not to other benefactors, that our forebears were grateful. So should we be!

This letter may be reproduced without change and in its entirety for non-commercial and non-political purposes without prior permission from Family Talk. Copyright © 2013 Family Talk. All Rights Reserved. International Copyright Secured. Printed in the U.S.A. Dr. James Dobson’s Family Talk is not affiliated with Focus on the Family.