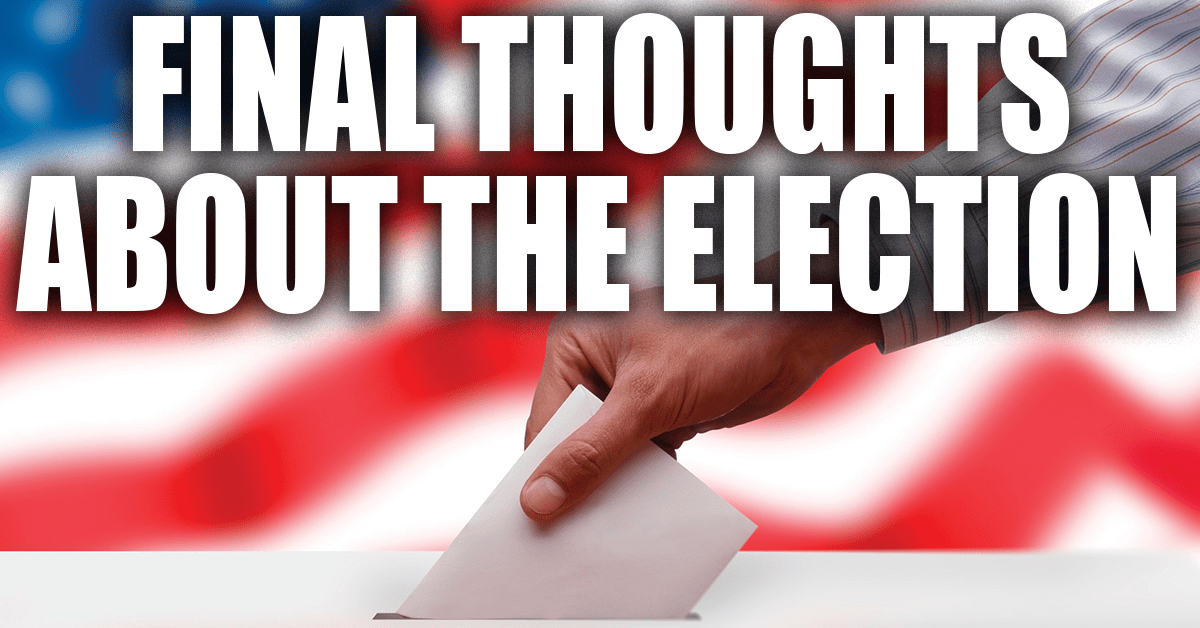 This will be my final letter before Americans cast our ballots on November 3rd. It is a breathtaking moment in the history of the United States. Perhaps I will be permitted to repeat a brief comment I made in my August letter because of its relevance to today. Many political commentators have stated that this election is the most significant since 1864, when Abraham Lincoln vied for a second term against Democratic nominee, George McClellan. The future of our beloved nation hung in the balance that year. If Lincoln had lost, the Civil War would have ended precipitously and the wretched evils of slavery would have remained legal in the Confederate States, and perhaps even in the North. Had Lincoln been defeated, the Union would have been torn asunder. Thank God Mr. Lincoln won, even though it cost him his life!

Now we are approaching another presidential election that carries enormous implications for the stability of our democratic system of government. Indeed, Newt Gingrich said that what we are facing now might bring an end to civilization as we have known it. He may have been referring to a possible revolution. Regardless, I believe his grave concern for our nation is valid. For centuries, America has stood as a shining light for liberty and freedom in our nation and around the globe. If we abandon our founding core values, the world will suffer for it. The binary choice before us is that stark.

How will Americans, and how will you, decide who to vote for as our Chief Executive Officer? I have heard from dozens of friends and acquaintances in recent weeks who tell me they will base their decision solely on a candidate's rhetoric, tone, style, or likeability. Does that describe your thinking process?

Just now, as I was about to react to that idea, my wife, Shirley, brought in an email that she had received a few minutes before from a friend. It quoted an anonymous statement that gets to the heart of the issue, as follows:

I'm voting for the future of my country!"

One final thought: With all respect, this election isn't about you. It certainly isn't about me. It is about our kids and grandkids. It is about those who are yet to come, if they are allowed to live. This vote has awesome implications for future generations and the nation we love. It is about our Constitution and the immutable, God-given rights it protects. It is about values, and truth, and greatness, and hope. That is why the notion of choosing a president based on frivolous personality characteristics is so unfortunate.

In summary, this election is for all the marbles . . . the Presidency, the House of Representatives, the Senate, and the Supreme Court. Together, they set the agenda for this country.

If you love America and don't want it to be "fundamentally transformed," it is time to do three things:

Also, consider forwarding this letter to your friends, family, and others whom you might influence.